If you’re short on time and need some inspiration to jumpstart your creativity, check out KiwiCo’s monthly science kits for kids.

Looking for a fun Skittles science fair project? Try this experiment with your 6th grader – sometimes playing with food is inevitable, but with sweet science, comes knowledge!

The colorful rainbow effect comes as the candy coating dissolves and spreads outward. The candy coating is made up almost entirely of sugar, with a little bit of food coloring. When the sugar dissolves in the water, that adds more stuff to the water around the candy. In other words, you’ve made the water around the candy heavier and more dense. Density is a measure of how tightly packed a material is. The sugar water around the candy has more stuff packed into the same space, so it’s more dense than fresh water. The denser sugar water sinks to the bottom of the dish and flows outward, while the lighter fresh water and food coloring stays on top of the dish.

Make your own colorful, bubbling lava lamp with this fun science experiment about density and polarity!

Try making a glow-in-the dark lava lamp by using quinine water (and no food coloring) instead of tap water. Place your lava lamp under a blacklight to light it up!

These mini rockets are so easy to make and so fun to set off, you’ll want to launch them again and again.

To see what’s going on here, try dropping a fizzy tablet into clear glass of water and watch what happens. You’ll see the tablet immediately create lots of tiny bubbles that rise up to the surface of the water. Those bubbles are carbon dioxide gas, created by a chemical reaction between two ingredients in the tablets. When that reaction takes place inside your pop-top rocket, the carbon dioxide gas has nowhere to go. More and more builds up inside your rocket until… pop! Eventually the pressure from the gas becomes too great and the pop-top seal lets go, sending your rocket shooting up into the air.

Learn about the conductive properties of graphite and draw your own design to see it light up! This is a super quick and easy science experiment that is entertaining for both kids and adults alike. 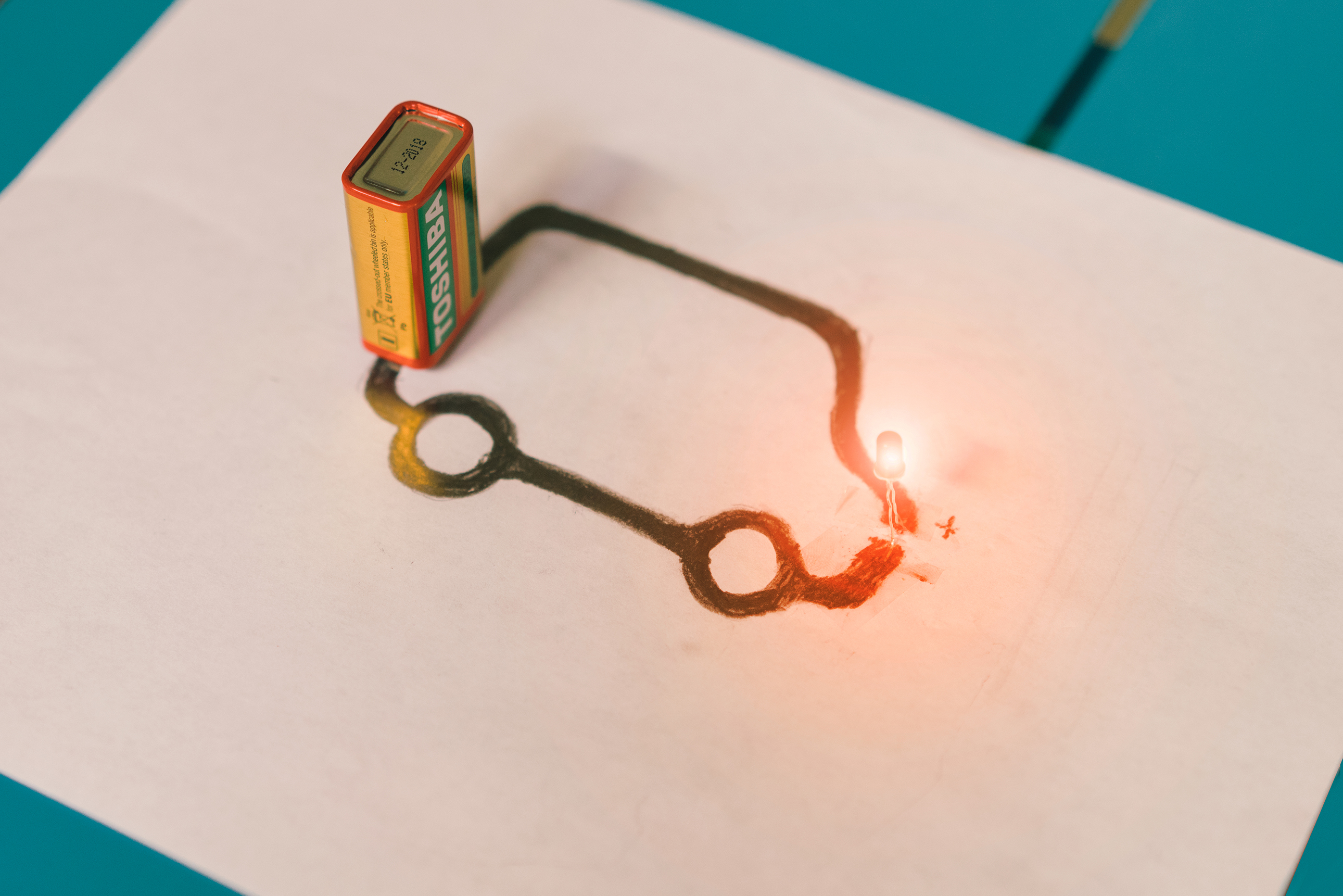 Graphite is an electrical conductor, perfect for learning about circuits  and electricity! Because graphite is low in conductivity, the success of a circuit will depend on the length, thickness, and amount of graphite on the paper. For example, the longer the graphite path is, the dimmer your light will be.

You don’t need high-tech gadgets to make your own hovercraft! This balloon-powered toy is easy to make with household materials and is a ton of fun to send zooming around!

This activity is a great way for kids to experiment with friction. As long as the balloon is still filled with air, you can easily push the hovercraft across a smooth tabletop. But as soon as the air runs out, it quickly comes to a stop. The cushion of air reduces the friction between the CD and the tabletop, allowing your hovercraft to fly, just like the puck on an air hockey table.

Use some household materials to plate your coins with copper! You can also try copper plating designs onto your coins!

Electrolysis is a way to dissolve bits of metal into acidic liquids like vinegar. When you run electricity through vinegar, the vinegar helps to carry electricity from one side of the circuit to the other. Electroplating is a way to put those little bits of copper onto something else. With just a little electricity, you can use electrolysis and electroplating to plate a quarter with copper. Does that make it look like a penny to you?

Did you know that water is actually a chemical? That’s why we call it H2O–water is made up of the chemical elements, hydrogen and oxygen! What would water look like if you could split water into its two parts? Try out this experiment to find out!

Take your paper airplanes to new heights by making a motorized launcher for them.

Paper airplanes work just like regular passenger planes and fighter jets: by redirecting air to keep themselves airborne. As long as a plane is moving quickly, its wings will redirect a lot of air downwards, which generates an equal upwards force (lift). This lift is enough to bear the weight of the plane against the pull of gravity. Your paper airplane launcher is effective because it gives the paper airplanes a lot of speed, and therefore a lot of lift — plenty to keep the planes aloft for lengthy trips around a room (or until they hit something!) 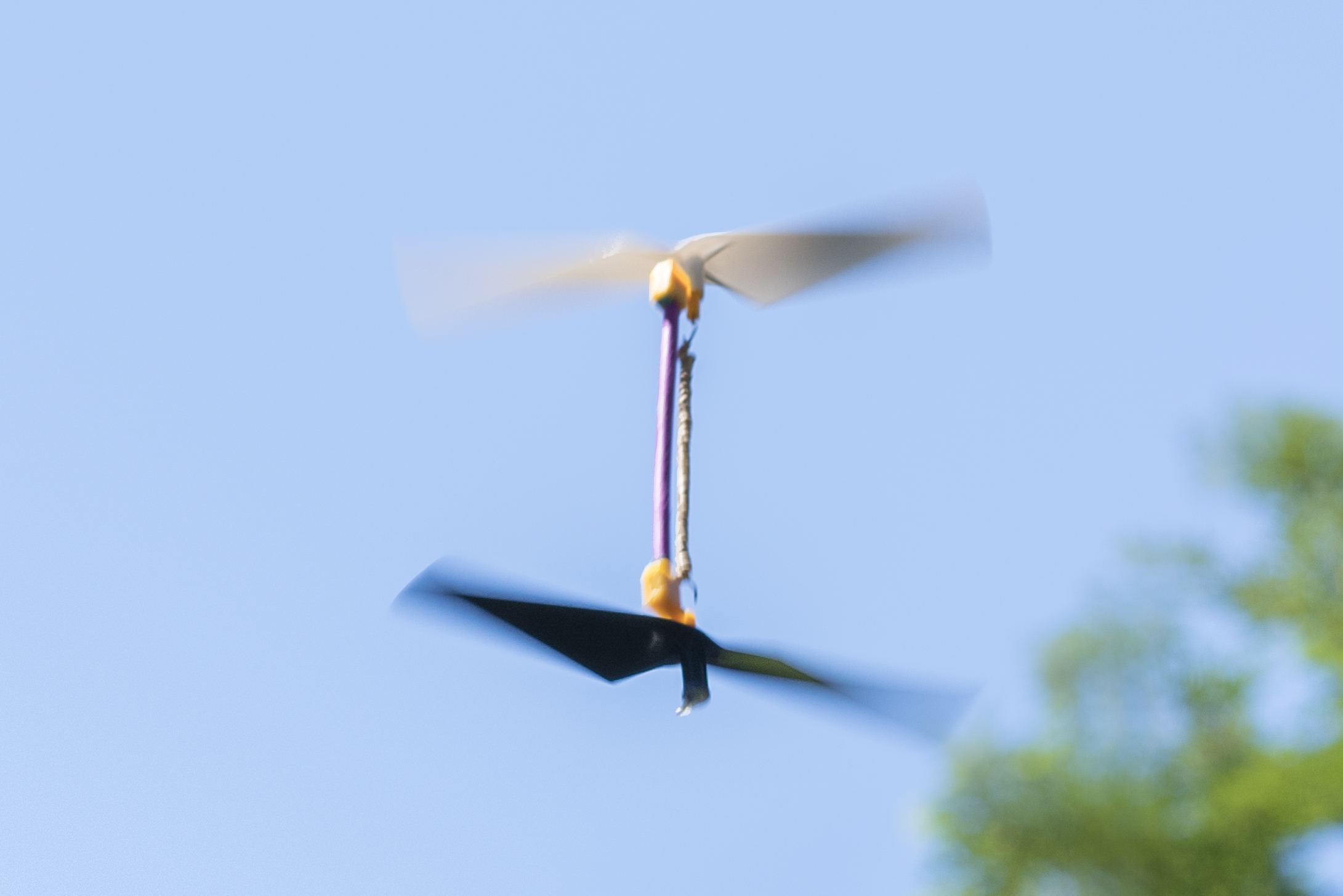 The two propellers on your rubber band helicopter are able to fly thanks to the same principles that keep real helicopters aloft. The angled blades of the propellers act like fans when they spin, pulling air from above and blowing the air downwards. This creates enough lift to counter the effect of gravity on the helicopter, pushing it higher and higher into the sky. If you set up your propellers correctly, with opposite blade orientations for each propeller, they should both blow air in the same direction, even though they are spinning in opposite directions… double the propellers means double the lift, and double the flying power!

Did you know that electricity and magnetism are closely linked? In this project, experiment with the interplay between the two by building your own miniature electromagnetic train that zips down a track all by itself.

Your carbon sugar snake is the product of three chemical reactions that are all dependent on heat. The first of these reactions occurs when sugar combusts (burns) in the presence of oxygen. This produces carbon dioxide gas and water vapor (also a gas), which pushes more of the sugar/baking soda mixture upwards. Some of this additional sugar heats up but doesn’t have access to any oxygen, so instead of burning, it undergoes thermal decomposition, producing solid carbon and more water vapor. This solid carbon now gives the snake some shape, and also gives the snake its black color. Lastly, the baking soda also decomposes in the heat, producing solid sodium carbonate, and carbon dioxide gas and water vapor. Altogether, these three reactions produce both the solid components of the snake (carbon and sodium carbonate) and hot gases (CO2 and water vapor) that expand and inflate the snake up and out of the sand bowl. The sand in this experiment doesn’t chemically react with anything in the growing snake. Instead, it evenly distributes the heat from the burning lighter fluid to the sugar and the baking soda, ensuring a slow, steady burn and the growth of a long carbon sugar snake.

Discover how music creates vibrations you can see using salt and a portable speaker! Then try experimenting with different genres of music to see which ones make the salt dance more.

Speakers, like your bluetooth speaker, produce sound by creating vibrations in the air. Normally, we only hear these vibrations, and we can’t easily see them. Plastic wrap, though, is lightweight and thin enough to vibrate in response to the sounds coming from the speakers. These vibrations move through the plastic wrap unevenly, pushing and shoving the salt around in interesting patterns. As a song progresses, these vibrations change, and the salt moves as if it were dancing. If you can find a YouTube video of a pure tone (like a single, sustained note), observe what happens to the salt when you play that tone through the speakers. A pure tone will create a consistent, unchanging vibration in the plastic wrap. Instead of dancing around, the salt should collect in places in the plastic wrap that aren’t vibrating, making patterns that depend on the frequency of the pure tone. Try a few other pure tones, one at a time, to see some other interesting patterns!

Learn about electrochemical cells and make a battery using pennies, felt, and a salt water solution. Then, power a digital clock with it!

Things start up when the zinc begins dissolving into the salt water solution. That chemical reaction leaves behind some extra electrons in the undissolved zinc metal. Those electrons could be used to make electrical power if they had somewhere to go to, since electricity is just moving electrons. On the other side of the salt water, the copper reacts by giving some of its extra electrons to the hydrogen in the water. So the zinc side is producing electrons, the copper side is getting rid of electrons… what would happen if you connected them? The electrifying answer is — you get electricity! Electrons zoom from the zinc side over to the copper side, powering any electrical things they pass through along the way. A single set of these two metals and their electrolytic solution is called a “cell.” Sandwich a bunch of cells together, and you get more electrical power from more electrons moving around. The pile of cells you’re about to make—called a “Voltaic pile” after the scientist who invented them, Alessandro Volta—is the basis for the batteries you use every day.

Have you ever noticed how plants grow toward the light? Build this simple light maze, and watch the plant grow around the obstacles to reach the light! Try experimenting with different mazes and see how the plant reacts. 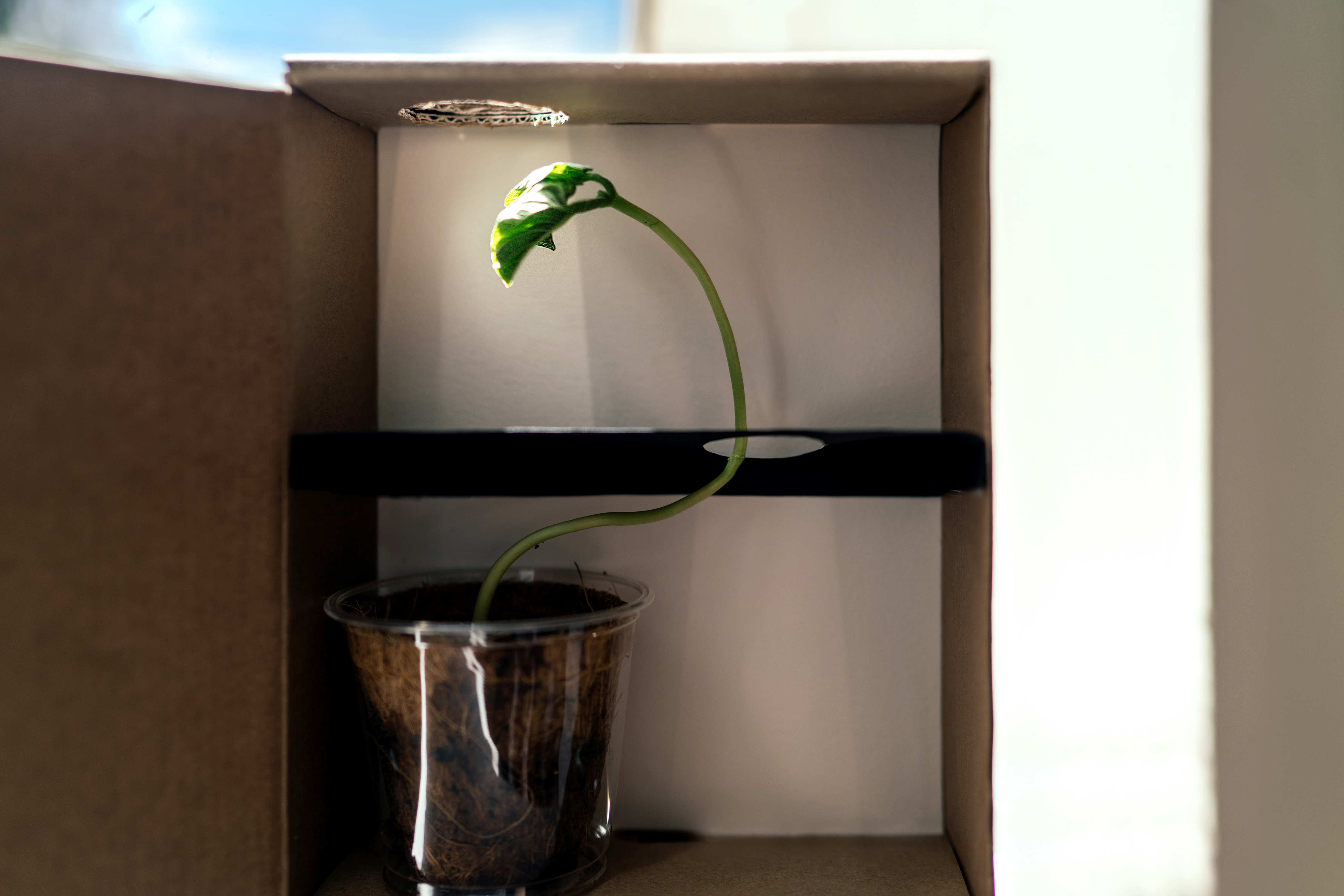