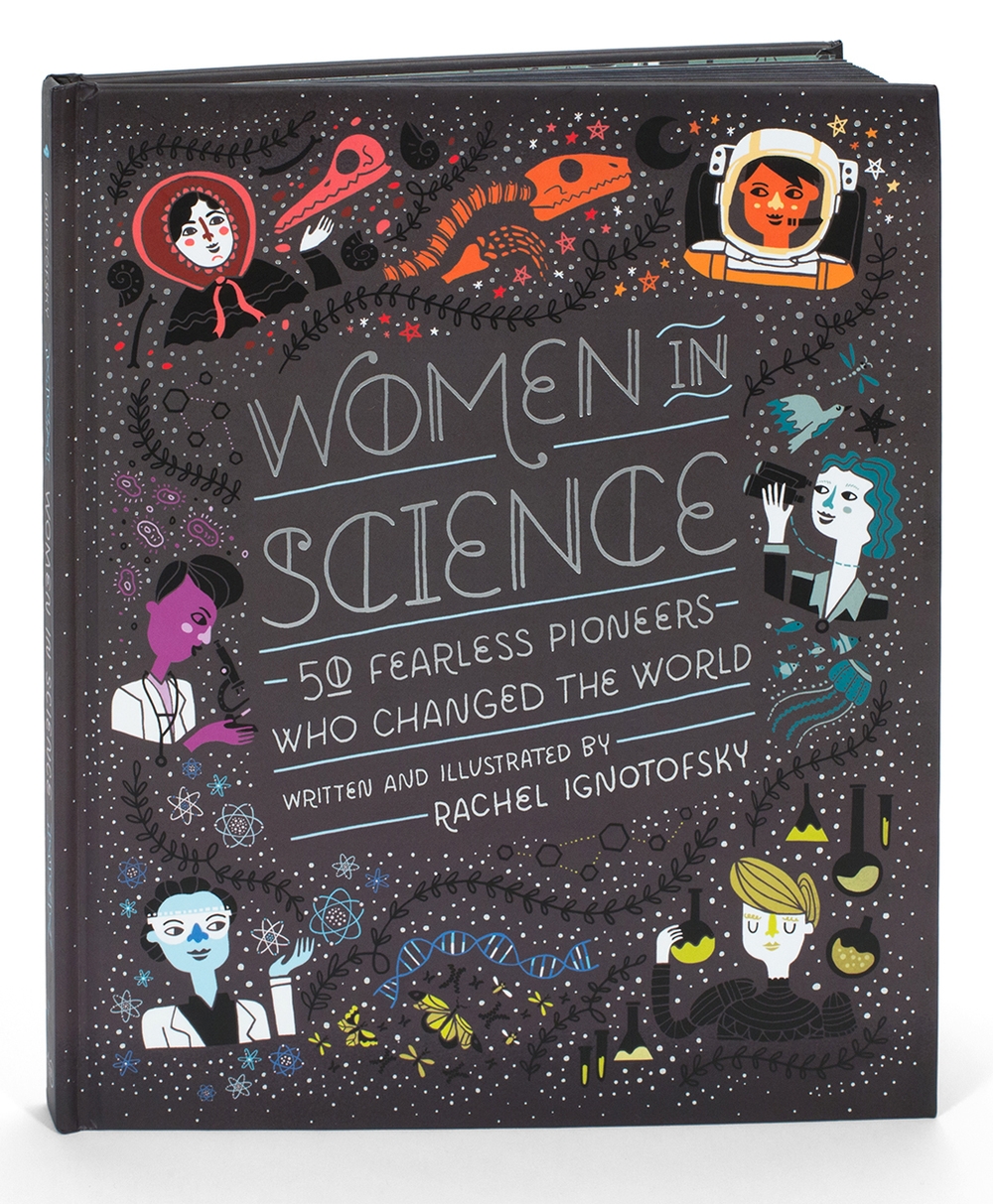 Women in Science: An Interview with Rachel Ignotofsky

Rachel Ignotofsky is a New York Times–bestselling author and illustrator. Her book, Women in Science: 50 Fearless Pioneers who Changed the World, is a KiwiCo favorite. A gloriously illustrated celebration of female trailblazers, Women in Science highlights the contributions of fifty notable women to the STEM fields of science, technology, engineering, and mathematics, with examples from both the ancient and modern worlds. The result is a fun and accessible book that appeals to kids and adults alike!

We sat down with Rachel to ask her about how she came to write this book. In the interview below, she shares more about her process and the importance of telling these women’s stories. 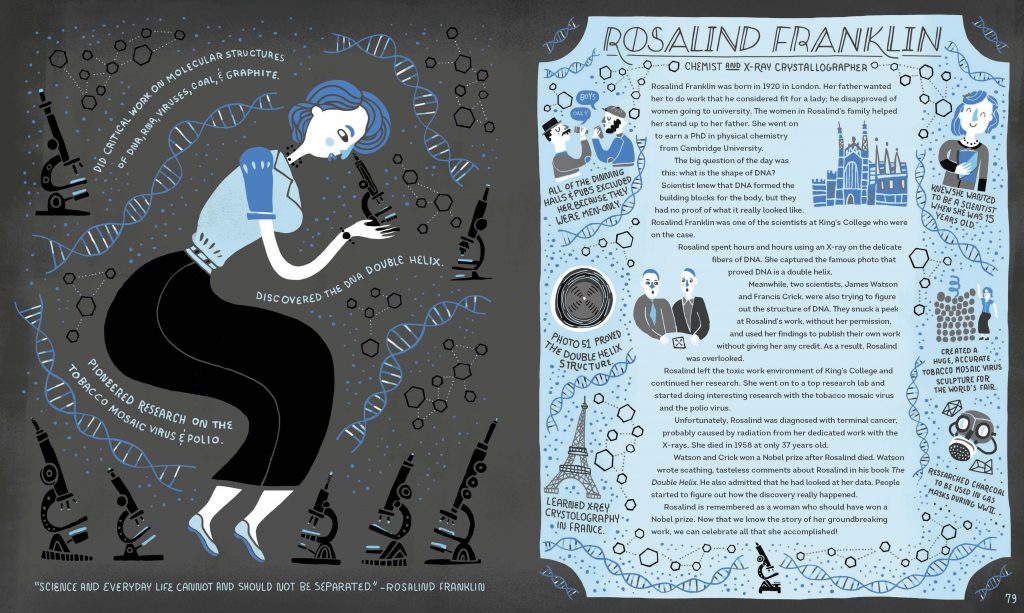 KiwiCo: Have you always been interested in science? Did you have a teacher or mentor who helped nurture your interest in science when you were little? What else inspired your love of science?

Rachel: Science has always been an exciting topic for me. Human anatomy was one of my favorite classes in high school. That passion for learning about biology and the mechanics of how the world works stayed with me when I decided to go to art school. 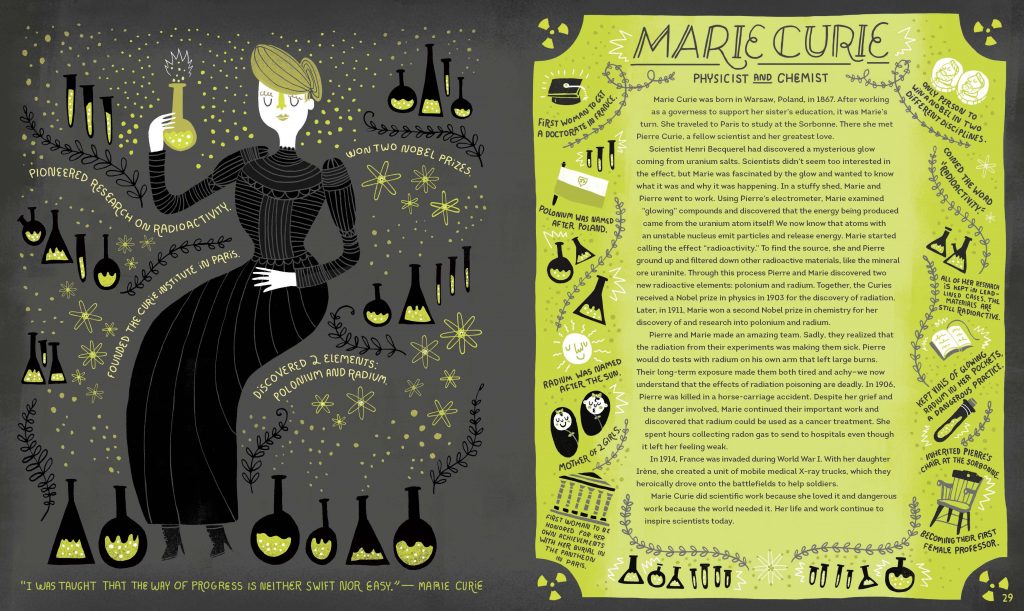 KiwiCo: What inspired you to write this book?

Rachel: For me, art and illustration are tools that need to be functional in some way. Before I wrote this book, I had a lot of friends who were teachers in public schools and would lament the lack of books about science for kids. As I was doing my research, I found that, with the exception of Marie Curie, there were very few stories about women in science. The more I read, the more amazing stories I uncovered about these remarkable women whose work was so impactful. I started drawing posters and putting them on social media and in my Etsy shop. I always knew it would be a book, but I wanted to test the idea first.

Now the book is being used as a part of science lesson plans as at the high-school level and has been translated into 25 languages. It shows you how much we needed to tell these women’s stories.

KiwiCo: How did you research the book and choose which scientists to include?

It was a winding path. I believe you have to read books to make books. I read a ton of heavy books on science starting with a book called Nobel Prize Women in Science. This book profiles six women who won the Nobel Prize and is very long but was an amazing starting point. Then I created a list of women to research with a focus on diversity. I tried to include a breadth of fields—from particle physics to biology and astronomy—as well as a diversity of economic backgrounds, races, religions and beyond. I wanted there to be a story in there that everyone could relate to—no matter who they were or where they came from. When you are inclusive, you get to tell a much more accurate history.

One of the first women I included was Edith Clarke, who was the first female electrical engineer and became the first female professor of engineering at the University of Texas at Austin despite the fact that she struggled with dyslexia. Her work was the foundation for many advances in her field. 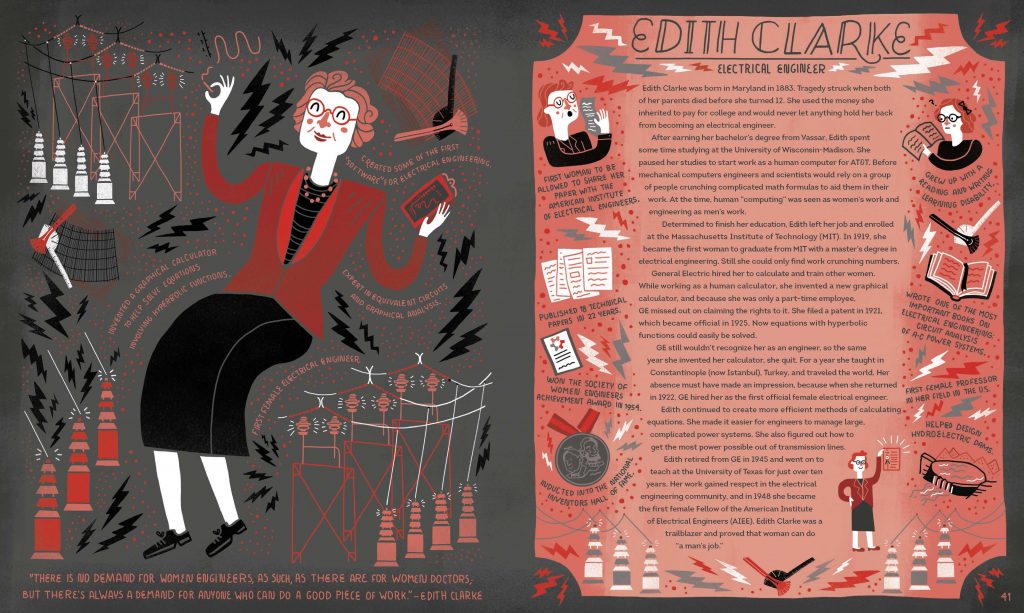 KiwiCo: How do you hope the book will inspire kids?

Rachel: My hope is that both young girls and boys will read this so we can reframe history with a new sense of normal. The only way to do that is to show real role models who affected history. My biggest hope is that it will give them a new set of role models to aspire to so that anyone can be a leader and solve the world’s biggest problems.

That said, not everyone is going to go into STEM fields, but the book invites people to enjoy science in their everyday lives. A lot of kids (and adults) label themselves as “not smart enough,” but science is for everyone.

KiwiCo: You organized the book chronologically starting with Alexandria (one of the oldest civilizations in the world) and ending with today’s scientists. Why did you decide to structure the book this way?

Rachel: I try to put history into everything that I do. Women have been working in science since the dawn of time. I wanted to include the earliest impactful examples for kids to understand how there have always been women scientists and to show how their work not only survived them but changed the world. 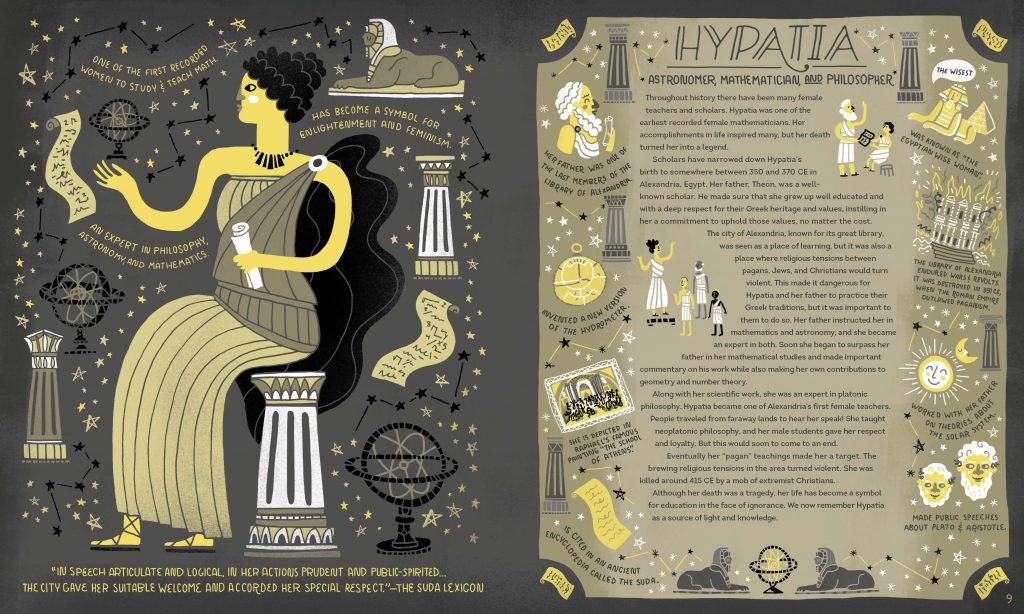 KiwiCo: We love your book because our mission at KiwiCo is to inspire kids to see themselves as innovators and creative problem solvers—which feels very much in line with the stories in Women in Science! Which women in your book were some of the most creative problem-solvers?

Rachel: Journalist Marjorie Stoneman Douglas spent five years researching the Everglades in Florida at a time when very little was known about it. She realized that the swamp was actually a connected series of rivers that protected the Floridian shore. The swamp was also a moving river of grass that acted as a nursery for fish. She was able to prove the importance of this ecosystem, and her work allowed the Everglades to become a National Park. Many years later, when the potential construction of a jet port threatened to harm the swamp resurfaced, she organized petitions and protests (at the age of 80!)—and won the case again. At the age of 100, she received the Presidential Medal of Freedom for her work. The kind of conservation she practiced isn’t just important for Florida; it is essential to the world. 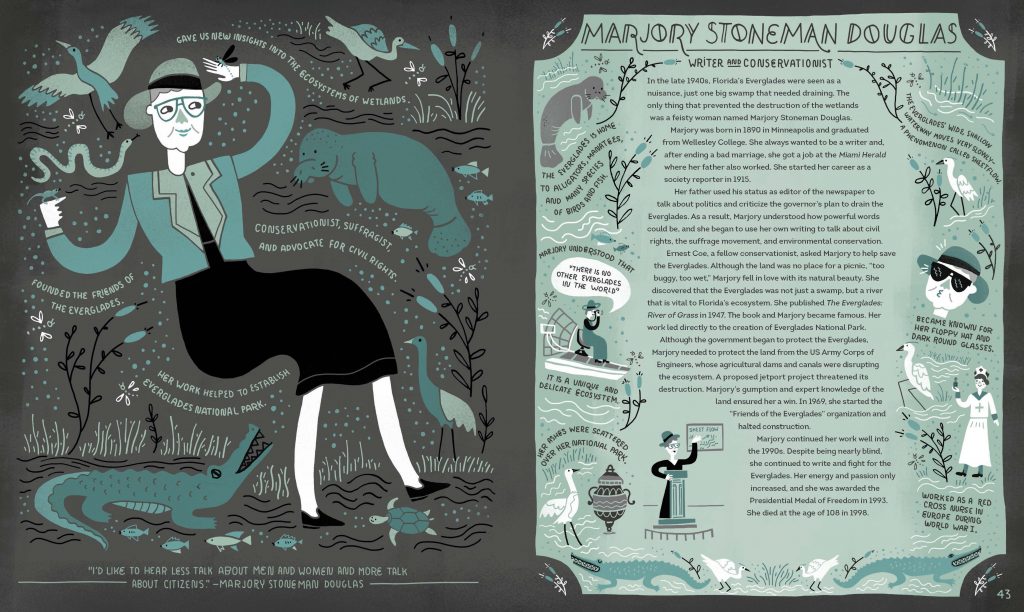 She served on the space shuttle Endeavor. She grew up watching the space race (and was also a big fan of the fictionalized show Star Trek). After returning from finishing her work at NASA, Mae started a number of programs to inspire people to get into the space field and became an inspiration to many. She was inducted into the National Women’s Hall of Fame and the International Space Hall of Fame. 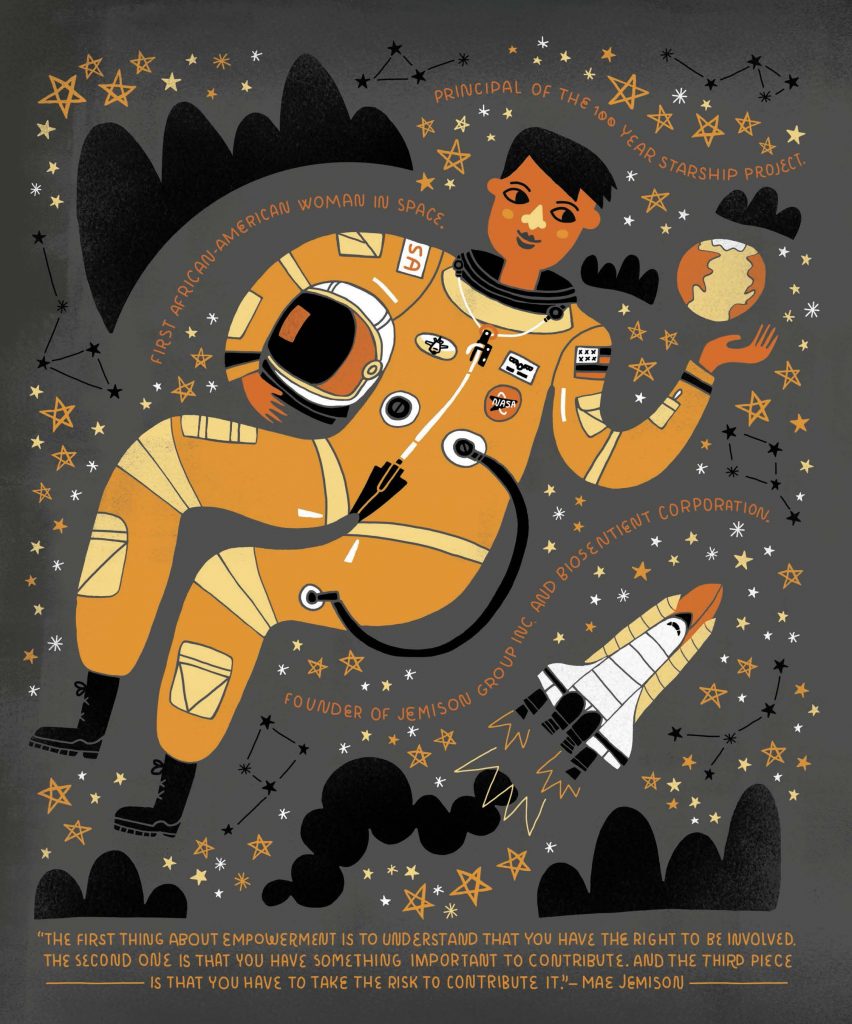 Each and every story has moments like that. In general, when I was researching the book, I felt indebted to the people in it. Each woman worked to create a better life for everyone. I want this book to be part of a living timeline that celebrates the achievements of all women. I want each story to include lessons that can be continued by the reader. The next great scientist could be you!

If you want to learn more about Rachel, you can visit her website at https://www.rachelignotofskydesign.com/ or her online shop.

For web, a link to pre order/purchase is required (e.g. Amazon, Barnes & Noble, Powells, or any online book retailer of your choosing).

See all from STEM ➜