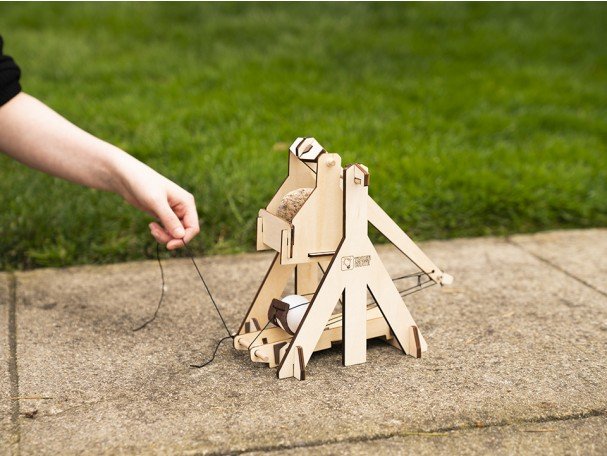 How Trebuchets Work | The Science Behind Trebuchets

A trebuchet is a type of catapult that uses a swinging arm to throw a projectile. They were created for a terrible purpose, but they’re also an amazing example of human ingenuity. For centuries, the trebuchet was the most powerful war machine in the world. They stood as tall as 60 feet (18m) and could fling 80 pound (36kg) objects up to 980 feet (300m). They were so powerful as siege engines that they even changed the way that castles were built, with walls becoming increasingly thicker to protect against trebuchet barrages.

After the invention of the first trebuchet in China during the fourth century B.C.E, the concept spread quickly and was further developed by engineers in the Middle East and Europe. Innovators across three continents and many different cultures contributed to their design, displaying incredible mechanical skill and scientific vigor.

But how do trebuchets work? How did they manage to be so powerful, lift so much weight, and make such a large impact on the world around them? What can we learn from the trebuchet designs of the past?

To explore the science of trebuchets, we have to begin with levers. Think about how you’d use a stick to lift up a big, heavy rock. The stick is a lever, and a small rock or stump could be used as a fulcrum to change the balancing point. If you push down on the far end of the stick, it’s easy to move the rock. In fact, the farther from the balancing point you push, the easier it gets! Engineers call this amazing ability of a lever mechanical advantage. Tons of everyday objects use lever technology, from scissors to chopsticks.

So how do trebuchets work, then? The throwing arm of a trebuchet is a lever, similar to a seesaw. The rod in the middle is the balancing point, and the ball and counterweight are like the people sitting on either side. But what makes a trebuchet so much more powerful than a seesaw?

Few new trebuchets are built these days. Our tools are different now — but the desire to build and to learn is universal. The same concepts that guided the construction of trebuchets still shape the world around us. Counterweight levers are used by both the cranes that build our tallest skyscrapers, and by the light switches that help illuminate our rooms. Next time you open the lid of a can, or sweep your floor with a broom, know that you’re using the same awesome technology that shook Medieval castles.


At KiwiCo, our interest in physics inspired us to create a project for learners to build their own trebuchet. The project comes with all of the materials you’d need to make a working trebuchet, and a magazine full of experiments and insights. For more awesome activities like this, check out Tinker Crate, which delivers science-based projects for ages 9-16+ every month!