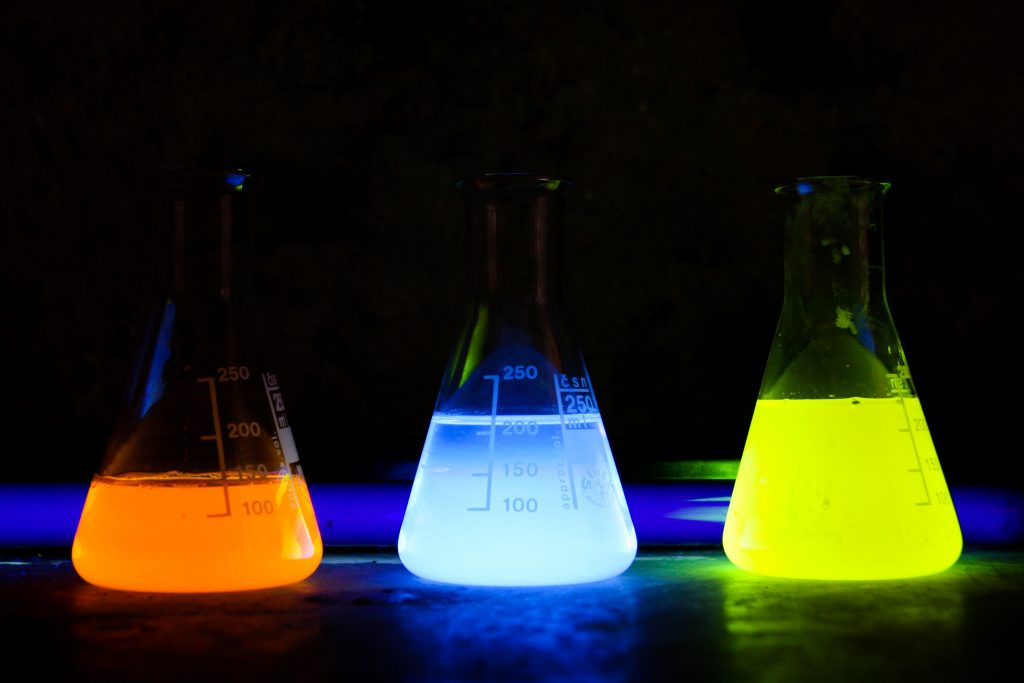 The Science Behind: Things that Glow in the Dark

It’s almost Halloween and time for spooky things that glow in the dark! Have you ever visited a dark room in a haunted house where your tee shirt and teeth radiated a greenish or purplish hue? That eery gleam is caused by a special type of light – called ultraviolet light (also known as “black light”) – that can make certain things glow in the dark!

Ultraviolet light is a special kind of light that we humans can’t normally see. Imagine the colors of light as notes on a piano — a special piano with rainbow keys. The lowest notes are red, then orange, then yellow, all the way up the keyboard to the highest, tinkliest violet notes. Now imagine that that the rainbow keys are just a tiny section of a giant keyboard with a full range of notes. Those keys just past the purple ones? They’re the UV keys. They play notes, just like the purple keys, but the sound they make is too high-pitched for us to hear. It’s the same thing with UV light. However, just because we can’t see UV light doesn’t mean we can’t see what it does.

Glowing from UV light is called fluorescence. Fluorescence was named after the mineral fluroite, the first known fluorescent thing that has a bright blue color.

So what happens to make a fluorescent material glow? Well, when it gets hit by ultraviolet light, the atoms in that material absorb the UV light and become excited. Think of it like how a trampoline bends to absorb the energy from your bounce. The trampoline can’t hold that energy for long, though, so it releases it by springing you upward. The same thing happens with fluorescence: the atoms release their excited energy as visible light. That’s the glow you see.

Humans see fluorescence best in the dark because we can’t see ultraviolet light. It’s outside the range of rainbow colors that our eyes respond to. When invisible UV light makes something fluoresce in the dark, it looks to us like that glow is coming out of nowhere. The glow still happens in daylight too, but we don’t notice it as much because of all the other daylight color we see.

Other animals (like insects, birds, and fish) notice fluorescence even in full daylight because they can see UV light. To them, UV looks like any other color in the rainbow. When a fluorescent thing turns UV light into a different color, it looks to them like if a yellow street lamp made your clothes glow purple instead yellow. Scientists think that the ability to see UV is why some of these animals evolved fluorescent markings.

Fluorescent objects can hide in plain sight. You only see the glow when you turn out the lights and shine a UV light on them. You might be surprised to learn what things can glow at home and out in the world around us.

To experiment more with things that Glow in the Dark, try out our crates and DIY projects:

Glow in the Dark Slime